Dr. James Naismith, physical educator, author, inventor, chaplain, physician (born 6 November 1861 in Almonte, Ontario; died 28 November 1939 in Lawrence, Kansas). James Naismith is best known as the inventor of the sport of basketball. He was also the first full-time athletics instructor at McGill University and established the basketball program at the University of Kansas in Lawrence, where he worked and lived for 41 years until his death. Naismith became the first member of the Basketball Hall of Fame in 1959. He was posthumously inducted to Canada’s Sports Hall of Fame and Canada’s Walk of Fame. In 2010, his original hand-written rules for the sport of basketball were sold at auction for $4.3 million, a sports memorabilia record.

Stephen John Nash, OC, OBC, basketball player (born 7 February 1974 in Johannesburg, South Africa). Steve Nash is widely considered the greatest Canadian basketball player of all time. He is a two-time National Basketball Association (NBA) Most Valuable Player (MVP) and the first Canadian to win the award. A point guard, Nash was an eight-time NBA all-star. He ranks third on the NBA’s all-time assists leaderboard with 10,335 and second in career free-throw percentage with 90.43 per cent. He represented Canada in international competition and led the Canadian Senior Men’s National Team to the quarter-finals of the 2000 Olympic Summer Games. Nash is a three-time winner of the Lionel Conacher Award as Canada’s best male athlete. He won the Lou Marsh Trophy as Canada’s top athlete in 2005. He is an Officer of the Order of Canada and has been inducted into the Order of British Columbia, Canada’s Walk of Fame, the Phoenix Suns Ring of Honour and the Naismith Memorial Basketball Hall of Fame. He was named to Canada’s Sports Hall of Fame on 27 May 2020 and will be formally inducted in 2021. He was named the head coach of the NBA’s Brooklyn Nets on 3 September 2020. 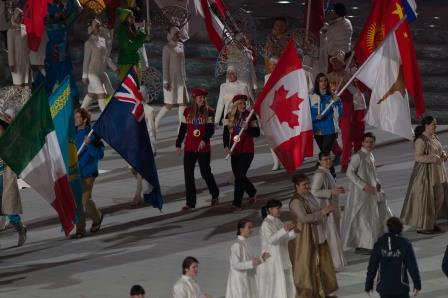 Kaillie Humphries (née Simundson), bobsledder (born 4 September 1985 in Calgary, AB). Kaillie Humphries is the only woman to win three Olympic gold medals in bobsledding. At the 2010 Olympic Winter Games, she and Heather Moyse became the first Canadian women to win gold in the two-woman bobsled. They won gold again at the 2014 Olympic Winter Games. Humphries won the 2014 Lou Marsh Trophy as Canada’s athlete of the year and won a bronze medal at the 2018 Olympic Winter Games. She was also one of the first two women to compete in an international four-man bobsleigh competition. Humphries has alleged that she was “driven off” the Canadian bobsled team in 2019 after filing a harassment complaint against a coach. She obtained US citizenship in 2021 and competed for Team USA at the 2022 Olympic Winter Games in Beijing, where she won gold in women’s monobob. She is the only woman ever to win Olympic gold medals for two different countries.

Harry Winston Jerome, OC, track and field athlete, consultant, teacher (born 30 September 1940 in Prince Albert, SK; died 7 December 1982 in Vancouver, BC). Three-time Olympian Harry Jerome won the bronze medal in the 100 m race at the 1964 Olympic Summer Games in Tokyo, Japan. He also won gold medals at the 1966 Commonwealth Games and the 1967 Pan American Games. Jerome broke the Canadian record in the 220-yard dash when he was only 18 years old and set or equalled world records in the 60-yard indoor dash, the 100-yard dash, the 100 m sprint and the 440-yard relay. Following his retirement from competition, he promoted amateur and youth sport through national and provincial programs. Jerome also advocated for better support of Canadian athletes and for greater representation of racialized Canadians on Canadian television and advertising. He was the recipient of numerous honours and awards, including the Order of Canada.

Joseph Jean Arthur “Le Gros Bill” Béliveau, CC, GOQ, hockey player (born 31 August 1931 in Trois-Rivières, QC; died 2 December 2014 in Longueuil, QC). Jean Béliveau was one of the most iconic players in the history of the Montreal Canadiens and the National Hockey League (NHL). The fourth player in NHL history to score 500 goals and the second to amass 1,000 points, he was awarded the Hart Trophy (1956, 1964), the Art Ross Trophy (1956) and the Conn Smythe Trophy (1965). His 17 Stanley Cups wins — 10 as a player and 7 as a team executive — is an unequalled NHL record. A member of the Hockey Hall of Fame and Canada’s Walk of Fame, Béliveau was made a Companion of the Order of Canada and a Grand Officer of the Ordre national du Québec. He is widely regarded as one of the best and most gracious players in NHL history, a renowned ambassador for the game of hockey.

On 15 December 2015, Kyle Shewfelt spoke to Jeremy Freeborn for The Canadian Encyclopedia at Canada’s Sports Hall of Fame in Calgary.